Re(living) Pain Through Remnants: Witnessing Stories of Violence in Taiwan Through Burnt Camphor 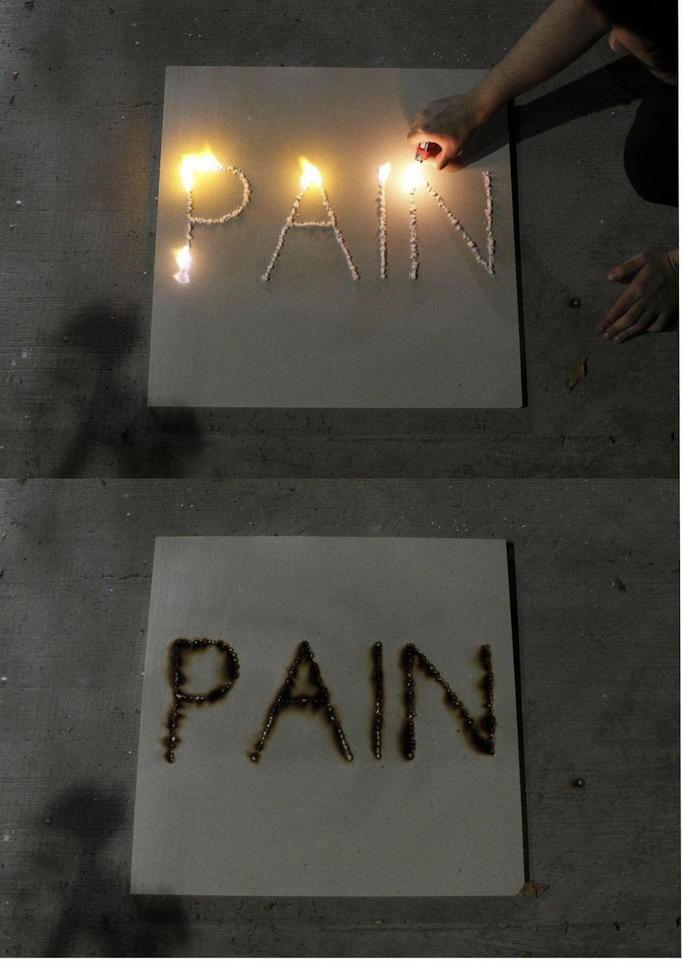 The photographs depict the burning of crushed camphor, arranged as an outline of the word ‘PAIN,’ and its aftermath which shows that the only thing that remains is the sooty residue. Here, camphor has been used purposefully to highlight the ‘pain’ of indigenous populations that resulted from Japan’s violent fixation over Taiwan’s camphor industry. The residue symbolizes the remnants of the painful past of Taiwanese people who were killed and/or relocated because of violence perpetrated by Japanese military forces. It emphasizes the lingering nature of pain and its memory in the minds of those affected. This essay intends to explore the nature and importance of pain in International Relations using Sara Ahmed’s seminal work, The Contingency of Pain, further utilizing it to analyze the case study of Japan-Taiwan relations that was based on violence against Taiwan’s indigenous populations between 1895 and 1915.

Camphor (kapoor, kafoori) is a white, flammable, highly aromatic terpenoid obtained from the wood of the camphor laurel tree largely found throughout Asia. It is antibacterial and antifungal, an anti-mutagenic and insecticidal, used in medicine and in chemical reactions as a catalyst. It is used to treat medical conditions in humans and is a natural poison to kill insects. Due to such chemical properties, it has various uses that have brought it into daily life through rituals, cosmetics, and medicine. During the late nineteenth and early twentieth century, camphor was one of the most coveted natural resources required for industrial purposes to produce celluloid, pharmaceuticals, and industrial chemicals. As such, between 1895 and 1915, Japanese military forces invaded Taiwan’s indigenous highlands to take control of their large camphor reserves. In their colonial pursuit, the Japanese military burned indigenous villages to the ground, forcibly relocated thousands of individuals and massacred anyone who stood in their way, be it resistance fighters or innocent civilians. This essay focuses on camphor as a commercial commodity over which Japan-Taiwan relations came to light during the years. Camphor acted as an indirect agent in facilitating the relationship between these two societies, which led to violence against Taiwanese populations. Camphor here is used to “evoke images of pain and suffering of others for the reader,” as Ahmed states in her essay.

Reviving the Painful Past

An explicit characteristic of pain highlighted in the photographs is that it leaves traces in the form of remnants, be it physical or emotional. Those remnants remain accessible to individual as well as collective memory and serve as reminders of the events that caused them to experience pain in the first place. As such, traces of pain and suffering faced by populations during large-scale violent events have the capacity to extend to successive generations, thereby serving as signifiers of those events through time. As seen in the photographs, after a few minutes of raging flames, the camphor sublimates into thin air without leaving any ash or liquid behind. All that is left is an outline of the soot on the white tile. This observation is indicative of the ephemerality (i.e., the temporary and short duration) of pain, which ceases after some time but leaves its experience etched in one’s memory. In case of Japan-Taiwan relations, the pain that Taiwan’s indigenous populations experienced at the time because of Japan’s colonial ambitions and obsession over camphor, left remnants in the minds of those affected, which in today’s times, manifests in various forms. According to Academia Sinicia’s survey, only 45% of Chinese would allow their children to marry Taiwanese aboriginal people. Moreover, in many instances, they are referred to as hoan-a which translates roughly as “nigger” in the Minnan Chinese dialect. That is, the ‘scar’ left in the form of Taiwan’s status as Japan’s first colony, reinforced by the brutal treatment of its indigenous people, serves as a reminder of pain experienced by them over a century ago. Camphor, in this case, “evokes history, but it also stands for it, as a history of war, suffering and injustice.”

Secondly, the nature of pain makes certain bodies ‘present’ and others ‘absent.’ Pain becomes “crucial to the formation of the body as a perceiving surface.” The body becomes visible through “experiences of dysfunction (such as pain).” The burning of camphor, for the purpose of the project, could be perceived as and equated to the burning of villages and livelihoods, in an attempt to render the story of Taiwan’s indigenous populations visible, by alluding to their pain as victims of colonial exploits. Furthermore, an effect that the photographs are incapable of capturing, but that accompanies the scientific process of sublimation is the potent smell of burning camphor. This complementary sense of smell hints at the multifaceted dimensions of pain, which extends beyond the singular sense of the visual. It is important to consider the role of other senses such as the aural and olfactory, which can also trigger memories of pain for populations, here, those affected in Taiwan.

Additionally, the idea of pain being associated with a wound that transforms into a marker of identity in various instances, complicates our understanding of the larger political context that surrounds that pain and the violent event. This transformation, as Ahmed explains, is problematic, because it “cuts the wound off from a history of ‘getting hurt’ or injured.” However, while burning camphor on the white tile, one may question its cause, consequence and motives that lay behind the act. The scars or remnants left behind attract attention to the larger historical event. Reactions to the photographs reveal its appealing nature, however, without fetishising the wound. The visible marks left on the tile became the initial point of attraction for the viewers, eventually leading them to question its origins. Answers to such questions reveal the actual perpetration of violence by Japanese military forces on Taiwanese bodies, that “happened in time and space.” Although the conduct may appear as diminishing the ‘real’ wounds of people from a painful past, the photographs aim at encouraging interactions with the history of Taiwan and violence inflicted upon its populations, providing scope for present-day audiences to empathize with their pain, and critique Japan’s colonial dominance during the time. Here, context – either verbal or through other forms of storytelling – becomes essential to the understanding of other’s pain. The story – written or spoken – gains significance equivalent to the pictorial representations of suffering itself. Only when one is aware of the narrative behind the use of camphor, can one attempt to unpack the representation of pain experienced by Taiwan’s indigenous populations.

The photographs function as a basis to explore the significance and nature of pain in international relations by highlighting its characteristics and relating them to the politics of camphor as a commodity widely used and desired for various purposes during the time. Japan’s colonial act of asserting control over the commodity had brutal and long-standing consequences for the indigenous populations in Taiwan between the years 1895-1915. The photographs portray the idea of lingering pain – pain that was inflicted on indigenous bodies of Taiwan but remained invisibilized due to capitalist social relations being built between these societies during the time. The use of camphor is ideal as a medium because of its subtle ubiquity in human life, and the way it burns is parallel to one’s actual experience of ephemeral pain. As such, the experience of the Taiwanese aborigines is brought to the forefront by using camphor – the very reason for their massacre at the hands of the Japanese. The burning of camphor, outlined as ‘PAIN’ emphasizes the lingering nature of pain and its memory in the minds of those affected, which gets visibilized through the medium of these photographs, conveying the silences and screams of Taiwan’s painful past.