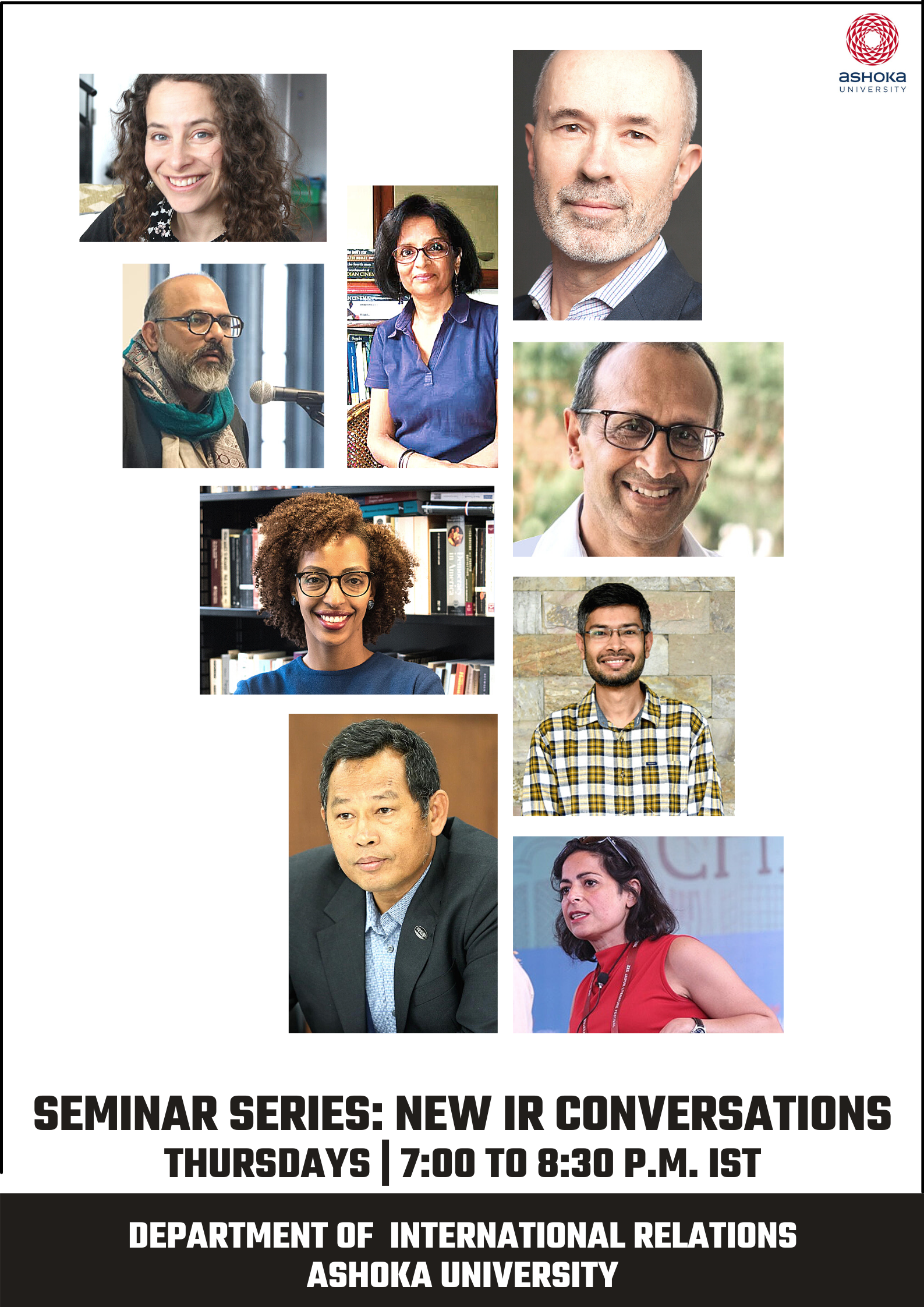 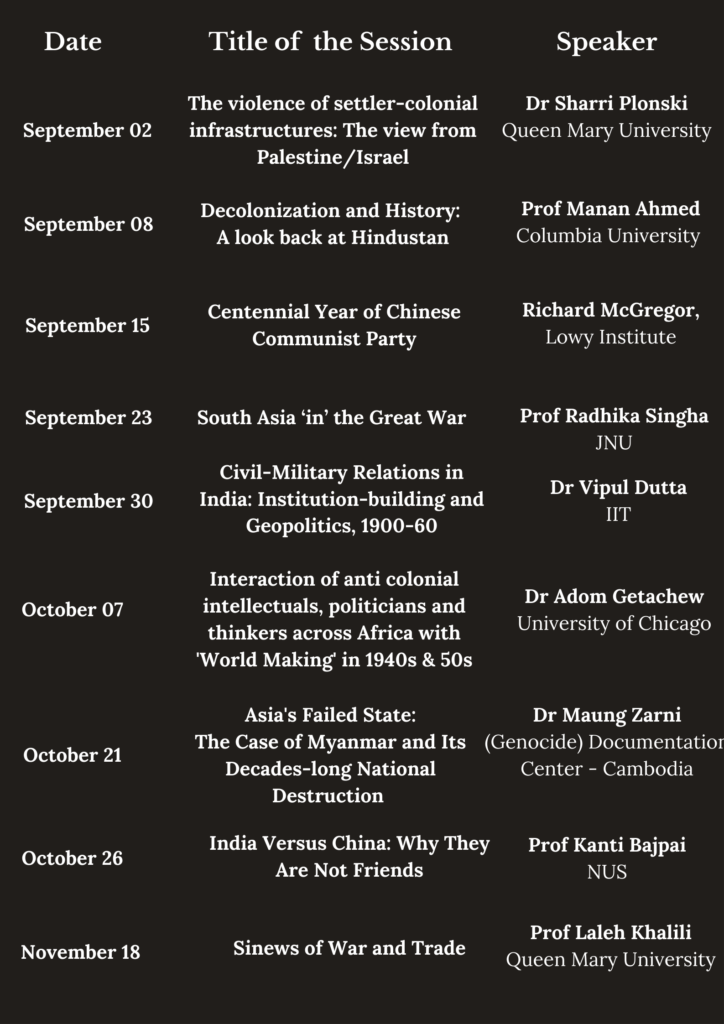 New IR Conversations #1: The Violence of Settler-Colonial Infrastructures: The view from Palestine/Israel by Sharri Plonski

Abstract: In this conversation, we will try to bring together critical research about Palestine and the political movements that shape and anchor this work. We will begin by thinking with settler colonial infrastructures, as both global and intimate; part of the particular story (and subjects) of the Israeli settler state as well as the global colonial and capitalist forces that sustain it. We will interrogate how infrastructure operates, how it folds into and undergirds everyday life and becomes invisible in plain sight. We will ask what we understand and see differently by making infrastructure highly visible, in particular how it produces, circulates and erases violence (as an essential component in the making of settler colonial space and the containing of indigenous lives). To make these relations visible, we need to centre Indigenous experiences of settler colonialism, and so will spend time discussing contemporary Palestinian struggles and the historical and global struggles that feed into and from Palestinian resistance in this present moment.

New IR Conversations #2: Decolonization and History: A look back at Hindustan by Prof. Manan Ahmed

Abstract: This conversation will focus on the importance of decolonization for the subcontinent, focusing on how Muslim histories were deployed by the British for colonial control. For decolonization as a methodology for historical work, we can examine the life and afterlife of Firishta’s *Tarikh* from early seventeenth century to early 20th century.

In his conversation with Prof. Menon, Richard McGregor will speak about the Chinese Communist Party, as it enters its centennial year. The Party, although it faces a host of challenges – demographic, geo-political, economic and environmental – is as confident as it has ever been in its 100-year history of its ability to compete with the US and its allies. But the Party also faces internal political upheaval over the new leadership model forced on it by Xi Jinping. While outlining these issues, Mr. McGregor shall offer valuable insights on the historical significance of the CCP achieving its 100th anniversary.

Prof. Singha, in conversation with Dr. Raghavan  will discuss how we can position South Asia, ‘in’ the Great War instead of viewing it as an external event to which India ‘contributed’. One way to do so is to explore the long history of   population circulation across the land and sea frontiers of India  and how it was re- shaped to imperial ends . Another way is to examine the labour regimes which sustained the frontier military complex in India and how these were repurposed for global war. A focus on the Indian ‘coolie’ and the ‘menial’ follower in the Indian Army can give us a more multi-sited,  less Eurocentric account of world war one, and bring  military history and international  relations into dialogue with labour and migration history.

The seminar will highlight the military institutional history of India through six decades that witnessed the two World Wars and then the fiercely contested ‘Cold War’ between the US and erstwhile Soviet Union. The seminar will focus on the nuances of civil-military relations which helped India acquire an extensive network of military education-cum-training institutions for herself during the early to mid-20th century. This continued even after 1947 enabling India to become a leader in officer training and professional military education programmes. The session will outline the larger international history of this mammoth institution-building exercise in India. It will also shed light on the sociological, diplomatic and institutional factors that powered this important historical process in the subcontinent.

Speaker Bio: Vipul Dutta is assistant professor at the department of humanities and social sciences at IIT Guwahati. He combines teaching and research interests in South Asian economic and military history.

New IR Conversations #6: ‘World Making After Empire: The Rise and Fall of Self Determination’ by Adom Getachew

In her conversation with Dr. Raghavan, Dr. Getachew will outline how anti colonial intellectuals, politicians and thinkers across Africa interacted with the exercise of ‘World Making’ during the 1940s and 50s. She will show how these interactions created new frames of understanding the international order, while exploring how the experiences of anti- colonial leaders in Africa offer valuable insights on how solidarities other than the nation state– such as race, economic exploitation and regionalism– influence the shaping of International Relations.

Speaker Bio: Adom Getachew is Neubauer Family Assistant Professor of Political Science at the University of Chicago. She is a political theorist with research interests in the history of political thought, theories of race and empire, and postcolonial political theory.

As a post-colonial political state, with a dozen sizeable ethnic nations, with divergent political histories, mutually incomprehensible languages, conflicting core interests, and national visions, Myanmar has proven itself to be an utter and complete failure since it came into existence in 1948.

Among the contributing factors are the on-going seven-decades of civil wars with fluctuating levels of intensity and scale, the 4-decades of slow genocide  of Rohingyas, pervasive and at times violent majoritarian racism, intra-minorities conflicts, the resource rape by external actors (multinational corporations and Asian neighbours such as China, Thailand, Singapore, S. Korea, Taiwan, Malaysia, Japan, and India),  the geostrategic manipulations by the United States and its poodle UK, chronic waves of nation-wide uprisings, the corrupt and incompetent military regimes, and the incurable coma in the Security Council. The latest military coup of February 2021, the resultant Zero Sum armed revolution, the raging Covid and the crumbling economy have  only accelerated this process of national destruction. This lecture will offer an insider’s look at this slow-motion process, based on the lecturer’s 30-years of scholarship, deep engagement in Myanmar affairs and international politics.

Speaker Bio: Maung Zarni is a UK-based fellow of the (Genocide) Documentation Center – Cambodia, co-founder of FORSEA.co, a Southeast Asian activist organization, and Burmese coordinator of the Free Rohingya Coalition, with 30-years of engagement in activism, scholarship, politics and media.

New IR Conversations #8: India Versus China: Why They Are Not Friends by Prof. Kanti Bajpai

India Versus China argues that the two countries are not friends for four reasons – increasing negative perceptions of each other since the late 19th century; differences over their perimeters (that is, their borderlands); adversarial partnerships with the Soviet Union/Russia and the United States such that they were never on the same side strategically; and a growing power asymmetry since at least 1980. These four P’s are foundational, and recent developments and episodes have only reinforced their salience. Drawing on existing scholarship and data (and some personal experiences), the book is a synthesis addressed to the general reader in India, with the aim of presenting a succinct argument for the troubled relationship between the two giant neighbours. Along the way, it attempts here and there to raise questions about fairly conventional views, particularly in India, about historical and strategic issues. Its overall conclusion is that the power imbalance has a deeply structuring effect: given its superior capabilities, China does not see why it should accommodate India; and India, given its relative weakness, does not feel able to make any concessions without signalling appeasement. Unless the power gap is reduced, it is hard to see how the two powers can be more friendly. India’s challenge is almost civilizational in scale and complexity.

Speaker Bio: Kanti Bajpai is the Wilmar Professor of Asian Studies, and Director of the Centre on Asia and Globalisation, Lee Kuan Yew School of Public Policy, National University of Singapore.

New IR Conversations #9: Sinews of War and Trade: Shipping and Capitalism in the Arabian Peninsula by Prof. Laleh Khalili

In this talk, drawing from her recent book, Sinews of War and Trade, Prof. Khalili will discuss the centrality of maritime transport infrastructures to the making of capitalism in the Arabian Peninsula. She will highlight how histories of colonialism, labour struggles, and war-making are central in the forging of these infrastructures.

Speaker Bio: Laleh Khalili is a Professor of International Politics at Queen Mary University of London and the author of Heroes and Martyrs of Palestine: The Politics of National Commemoration (Cambridge 2007), Time in the Shadows: Confinement in Counterinsurgencies (Stanford 2013), and Sinews of War and Trade (Verso 2020).